The main objective of this experimental study was to investigate the effects of low velocity impact loading on the pressure bearing capacity of the E-glass/epoxy composite pipes. The pipes were produced by the conventional filament winding technique comprises of six axisymmetric layers with (±55°)3 winding angles. The specimens were impacted at three different energy levels which are 5 J, 7.5 J, and 10 J using an instrumented drop weight impact testing machine (IMATEK IM10). The samples were then filled with water and subjected to burst test until distinct leakage failure is observed. The results indicate that the peak force and contact time increases with increased of impact energy. For impacted samples, the pressure tests show that the burst strength of the pipes decreases with increase in energy levels during impact loading. During the burst tests, several damage types named leakage and eruption were observed.

A case study of failure discussed in the 82 nd International Conference of Doble Clients. 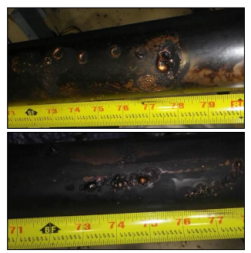 The discussion of this paper will focus on the H1 Trench COTA bushing, which failed after field maintenance handling that would not normally be expected to have a negative effect on a bushing. Following the failure, the top air side porcelain was found ruptured and missing; the bottom insulator was fractured into a number of pieces. The H2 and H3 bushings from this transformer, which were identical Trench type bushings, were also removed and disassembled for inspection to help identify a possible root cause of the H1 bushing failure.

An analytical study was performed about piston failure by fatigue. Fatigue cracks are initiated and propagated by the action of mechanical and high temperature loading conditions which induces cyclic stresses in the piston material.  Various proposals and solutions are presented so that necessary care can be taken to prevent piston failure in future. Catastrophic failure of a 10 m high, 8 m diameter steel storage tank containing approximately 350 m3 of waste solvent led to a significant environmental incident in 2009. An investigation was carried out to establish the root cause and to learn lessons that might prevent a reoccurrence.

ngth low alloy (HSLA) steel with a nominal composition of 0.15C–1.25Cr–1Mo–0.25V is being extensively used in space programme. Owing to its ease of fabrication and welding, a tank was fabricated out of this alloy. The tank is used to contain strontium per chlorate which on combustion develop secondary thrust, effectively used during attitude control of satellite launch vehicle. During one of the routine qualification tests, a tank had failed at an internal pressure of 109 bar, against a designed proof pressure of 120 bar.

Failure was initiated from long seam weld of a cylindrical shell and propagated into the parent material thereafter. Detailed metallurgical investigation has been carried out to understand the cause of failure. This paper brings out the detail of investigation carried out. 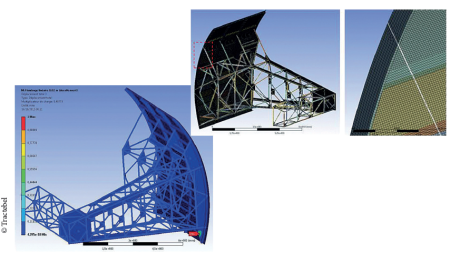