Wear and corrosion of taper connections in modular hip prostheses have gained much attention due to the serious biological response that can occur due to the metallic debris originating from this articulation.They present 3 cases of stem taper fracture as the ultimate failure mode of this design. 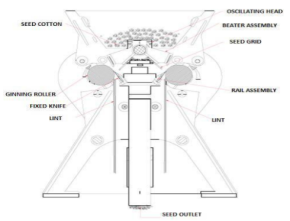 paper published by IJRET (International Journal of Research in Engineering and Technology).

In ginning machine where space is limited for driving the mechanism a Needle roller bearing having diameter of 20 mm is used in between connecting rod and head pin to give the relative motion between parts. As the continuous impacting of repetitive load on bearing, it fails with in shorter period of time if proper lubricant is not supplied by grease gun after 2 to 3 hours. While bearing are considered under observation it is found that bearing are fail due to brinnelling. So design and analysis of needle roller bearing is vital to calculate the life of bearing and to make sure whether this bearing is suitable or not. So it becomes mandatory in designing to calculate radial load applied on bearing as the bearing is rolling contact bearing, from this life of the bearing can be calculated and finally analysis by ANSYS software is done to find the result so that we can conclude for bearing.

In this paper, a case of severe strip breakage in rolling mill of Thin Slab Casting and Rolling (TSCR) shop of TATA Steel, Jamshedpur is presented.Visual observation revealed complete splitting with material missing along the central axis of the strip. Presence of defects in form of white stringers, white patches and holes were observed along the same axis just ahead of split location. Metallurgical analysis revealed association of these defects with slag type foreign materials in the rolled strip. The entrapments of un-deformable materials like slag in slab resulted in the formation of surface discontinuities on the strip on account of differential rolling. The discontinuities manifested in form of holes at lower strip thickness in the later stands of the mill. Inhomogeneous deformation about such holes also resulted in material overlapping. In summary, the breakage of the strip was found to have a strong correlation with the presence of heavy chunk of foreign inclusions from secondary steelmaking sources. In this study, transient pressure in piped liquid due to waterhammer is a function of structural restraint at elbows. To study the effect of this phenomenon on polyethylene elbowed pipe networks, experimental tests were performed on polyethylene bent pipes, either in the absence or presence of a pre-crack by measuring the toughness and determining the mechanical behavior of HDPE. These characteristics were been used to perform simulations using ABAQUS software, the internal pressure increase, to investigate the safety of bent pipes using an angle of 90 ° bend with 11.4 mm thickness and a right portion of 150 mm as length « Pipes and elbows are important components in any piping systems for transportation of water. These structures are subjected to complex loads taking into account their geometrical configuration and the multiplicity of the loading conditions in service. The origin of failure of these mechanical components is directly related to the presence of defects. The principal objective of this work is to analyze the severity of defects on high density poly-ethylene pipe widely used for water piping networks. »

A paper presented at « International Conference on Electromechanical Control Technology and Transportation » (ICECTT 2015).

The paper deals with the bending tests of new designed joints for bus skeletons. The frames of buses have to satisfy various demands, but the safety of the passengers is the priority. The actual welded joints should be replaced by new type of profiles connections in the future. Finite elements method was used for the bending test simulation and for the stress investigation; the real experiments were done using the universal test equipment ZD10/90. Obtained results are comparable, so authors aim to realize next experiments in next days at which other shapes of the joints will be tested. Read more An article which will be published in International Journal of Engineering and Technology, Vol. 8, No. 6, December 2016.

The Challenger Solid Rocket Boosters (SRB) Field Joint initial design was deemed as a direct cause of the shuttles catastrophic failure during lift off.  The Field Joint SRB was a key component in containing dangerous gases produced in the SRB.  After conducting research on the Challenger accident, a Fault Tree Analysis was developed to analyze the reliability of the SRB field joint configuration in relation to its goals.  The reliability model will show how the field joint fell short in terms of operational reliability.   Read more at.