In this work, fracture failure of a shell-tube heat exchanger at the tube-to-tubesheet welded joints was investigated. Fatigue started at initial defects of the welded joint was confirmed as the failure mechanism of the heat exchanger. Bad welding and unsuitable expansion gave rise to the formation of initial cracks. The alternating stress comes from various reasons such as the resonant vibration.

This paper presents the results of a failure analysis investigation conducted in a connecting rod from a diesel engine (18 V, four-stroke) used in the generation of electrical energy. The continuous output of the engine was 10.5 MW, at 600 rpm ; before the failure of the con-rod it accumulated 35836 service hours, working with a load factor of 80%.

The formula SAE is a competition among students worldwide, where they are challenged to design, build and test a small formula-type racing car, following rules and specifications defined by the Society of Automotive Engineers (SAE). In the present analysis, a premature failure of a half-shaft of the transmission system of a racing car occurred after circa 100 km of use. The results show that the alloy steel bar used for the half-shaft did not follow specifications, with a consequent lower strength and resulting in a material with insufficient loading capacity and fatigue resistance. As a consequence, the fracture process was a confluence of torsional fatigue crack propagation and overload ductile fracture through the spline section of the half-shaft.

There are 16 angles in Airbus A300s wing box. On the right side, rear spur, and lower flange area of the center wing box, one of these angles had been cracked with a length of 28 mm. This crack has decreased residual strength of the part under allowed values and resulted to a rupture in the rear spur lower cap. Several reports of the same occurrences in other Airbus A300 air crafts, highlight the importance of finding the causes of this failure.  Finally, it was concluded that corrosion fatigue was the main reason which itself comes from manufacturing, maintenance, metallurgical, and geometric reasons as were discussed in this study. 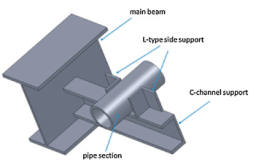 Incident involving failures of ASTM A53 carbon steel pipe, connected to pressure safety valve and carrying raw gas has caused serious supply disruption. This study was performed to identify the most probable cause of the pipe failure.