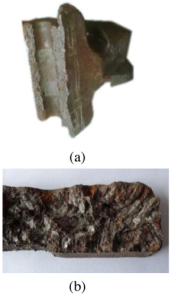 This paper was published in « Case Studies in Engineering Failure Analysis » on April 2014. It investigated the brittle fracture mechanism of a grade E cast steel knuckle that is one of the key components of the coupler for railway wagon.

As a result, it can be inferred that under an impact load that did not exceed material fracture limit, the micro-cracks initiated from weld repair zone propagated rapidly into the inner matrix by continuously fracturing the dendrites along shrinkage porosity regions until the knuckle failed instantly.